This site uses cookies. By continuing to use our site, you are agreeing to our use of cookies.

The history of Stoer Lighthouse 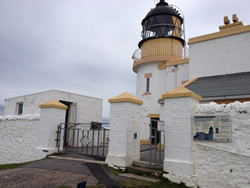 The lighthouse here at Stoer Head is one of nearly 200 that are located all around Scotland's wild coastline. Operated and maintained by the Northern Lighthouse Board they warn ships of dangerous waters and provide important navigational information. Between 1797 and 1938 Robert Stevenson and his descendants designed most of Scotland's Lighthouses, including this dramatic building. The remote and challenging lighthouse locations underwrite an amazing historical achievement.

Robert Stevenson's talented family also included the famous writer Robert Louis Stevenson (his grandson). Visits with his father to remote lighthouses are thought to have inspired his books Kidnapped and Treasure Island.

The Building of Stoer Head Lighthouse

Very little has been written about the history of Stoer Head Lighthouse. It wasn't until 1853 that regular Wreck Returns were kept and figures for 1859-66 showed that an average of 24 vessels a year were stranded on sands and rocks around the Scottish coast. Alan and Thomas Stevenson had now taken over as engineers for the Northern Lighthouse Board and they prepared a list of 45 possible sites thought to be desirable to complete a system of lights for the coasts of Scotland, Stoer Head was included in this list. But it was not until 1870 that the light marking the headland of the Point of Stoer was finally built. Although the lighthouse is relatively short (only 14 metres high) its elevation above sea level is 54 metres. 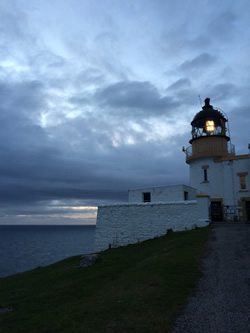 A Principal Lightkeeper and an Assistant and their families lived at Stoer Head until the light became automated in 1978. They were quite self sufficient and nearby you can see the remains of the former byre, stable, cow shed, pig house and cart shed all built for life at the lighthouse station. The Lightkeepers’ children were educated at Stoer Public School, however there were no senior schools in the county of Sutherland so the children had to continue their education away from the lighthouse at boarding school. Lightkeeping was a remote, lonely and hard existence. One task overruled everything: the light must burn at maximum intensity throughout the hours of darkness.

During long winter nights, the need to constantly check everything and trim the lamp wicks every four hours was extremely demanding.

The lighting system is an array of sealed-beam electric lamps, as used by locomotives for headlights. When daylight falls and rises between set levels a small light sensor automatically switches the banks of lights on and off.

Got a question - get in touch, we're happy to help!?